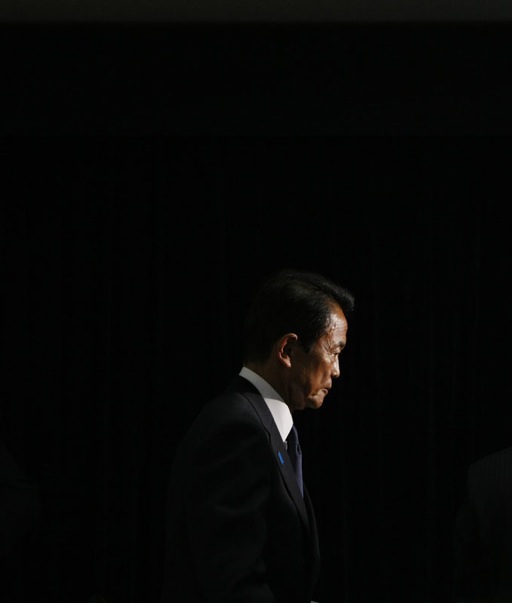 Farewell to photogenic Aso
http://blogs.reuters.com/japan/2009/09/08/farewell-to-photogenic-aso/
Japan’s voters may have overwhelmingly rejected Prime Minister Taro Aso at the polls last week, but he and my camera got along just fine.

The 68-year-old makes vigorous gestures with his hands and strong facial expressions. His crooked smirk and his eyes that sometimes seem to be popping out of his head always gave me a lot of interesting photo choices.

Now the photogenic Aso must pack his bags and hand over the prime ministerial house keys to Yukio Hatoyama , the leader of the new ruling Democratic Party of Japan.

Hatoyama, once nicknamed “the alien” for his prominent eyes, is ― visually at least ― less interesting except for his unruly locks that sometimes blow about in the wind.

The problem for me behind the viewfinder was that Hatoyama was expected to win by a landslide while Aso was the visual winner.

Surrounded by fluttering Japanese national flags, Aso in shirtsleeves looked vigorous when campaigning and his smile was that of a winner and his strong hand gestures displayed an eloquence which did not exist in his words.

But Hatoyama, who mostly wore dark suits, hid behind microphones and covered his mouth when speaking and on the rare occasion he tried to convey strength and determination through his body language, he came off looking awkward and unnatural.

On election night, Hatoyama won a landslide but just smiled. The jubilation that might be expected from such a massive victory was hidden from sight. By contrast, the defeated Aso stepping into shadown after making a speech acknowledging defeat looks like the fallen hero in a movie.

I hope Aso gives Hatoyama some advice when he hands over those keys. Something like “Try using your hands when you give a speech” should do the trick.